More than 250 local residents from Haslemere and the surrounding area attended the launch event for Haslemere Vision at Haslemere Hall last Saturday April 27th and learned of  detailed proposals for engaging the whole community in the process of preparing and drafting a neighbourhood plan for Haslemere and the villages that surround it. Of those who attended 216 voted in favour of the proposals and only six against and many volunteered to take an active part in the future planning process.  The Organising Group plans to hold a series of smaller events around Haslemere and the villages seeking further volunteers and explaining  the proposals to the widest possible cross section of the community. 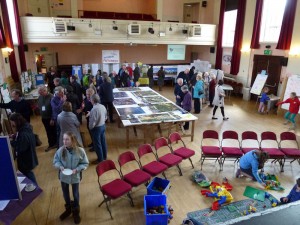 During the five hour Haslemere Vision launch at the Haslemere Hall on Saturday  more than 250 local residents studied large scale maps and aerial photographs of the area as well as thought provoking computer generated pictures showing possible future developments for the town and villages. They were invited to post suggestions and comments on future developments they would like to see, to consider the trends that may affect the future of the area and  to add their thoughts on what makes for a good society. They also enjoyed video and film of Haslemere past and present. Visitors were able to study details of the work of the organising committee so far and of  proposals to form a new Haslemere Vision Forum and Steering Group  to take on the process of community engagement and plan preparation in the coming months.  They were asked to vote as to whether or not  they approved of the process so far and  the proposed future process. The results of the votes were: 225 approved of the process so far and 5 did not; 216 voted in favour of the proposed future process while 6 against.

Stewart Brown, chairman of the organising group said “ We are hugely encouraged by what appears to be an emphatic endorsement of our proposals at this first launch event but we will hold a series of smaller events in May and June to reach the widest audience we can before the present organising group disbands  and a new volunteer steering group  is  formed to take on the actual plan preparation process.”