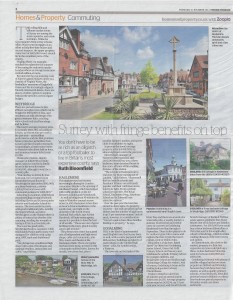 The rolling hills and affluent market towns of Surrey are among the most expensive real estate in Britain. While the Government’s Help to Buy scheme offers 95 per cent mortgages in an effort to help first-time buyers and second steppers, the upper property value limit of £600,000 won’t stretch far in the swankiest parts of the county.
Virginia Water, for example, reached the milestone this summer of becoming the only area outside London where an average home now costs £1 million or more. But don’t let the eye-watering costs of Surrey’s gated enclaves deter you. Outside of Virginia Water, the footballers’ mansions of Englefield Green and the increasingly oligarch-friendly Wentworth Estate, there are plenty of other options to explore without the need for a seven- figure budget.
HASLEMERE
This market town has become increasingly alluring for London commuters thanks to the opening of Hindhead Tunnel, which has helped with traffic gridlock on the A3 between London and Portsmouth.
As well as being from 49 minutes by train to Waterloo (annual season ticket £4,456) Haslemere is less than an hour’s drive to Heathrow or the south coast, and right on the doorstep of the South Downs National Park which, says Adrian Hardwick, of Keats estate agents, means it is possible to have the best of all worlds. “There are a lot of great facilities in the to~, plus it is really easy to get around.”
The pretty town centre has a good mix of independent and high street shops, cafes and restaurants, plus film, music and theatre at the Haslemere Halls. There are regular festivals (from music to beer) in this community-spirited town, known for its safe, low-crime feel, plus a monthly farmers’ market, and sports clubs from athletics to rugby.
At present the town’s average property price is £459,000, up almost eight per cent in the past year. Chris Hebert, manager of Hamptons International, says £600,000 would buy you a three bedroom, semi-detached house in the centre of town within walking distance of the station.
“The schools in Haslemere are a real draw for those moving out of London,” adds Hebert. “Shottermill first and middle schools and Fernhurst Primary are extremely popular and their catchment areas tend to be tight. From a private, school perspective, The Royal School, Haslemere Prep, Amesbury School and St Edmund’s are attractive options.”
Over the past year the town has started to show signs of a property recovery – not only are prices up but Hebert says the number of applicants is up 51 per cent year on year. Lack of stock, however, is a consideration. “It is not usual to have three families bidding on property,” he says.

Sign up for our newsletter, we'll send you update emails for the subscriptions selected below