Have your say on the future of our roads and streets

Traffic and parking are two of the biggest issues currently of concern to our community. Both can have a negative impact on our daily lives by adversely affecting the attractiveness and functioning of our streets, our safety and the environment. Both will increase in future as a consequence of additional housing development in Haslemere and nearby areas. In today’s article we discuss 3 key questions:

How do we see the future of our roads and streets?
Should we:
• Give priority to motorised traffic by supporting street designs that promote the most efficient transit of cars and lorries? This would inevitably make life more difficult and dangerous for other road users (especially pedestrians and cyclists) as well as increasing noise and pollution
• Encourage other forms of transport such as park and ride, taxi shares, Hoppa buses and electric bike schemes?
• Promote a combination of the above? Allow for some short term traffic growth and increase in parking provision alongside measures that reduce the dominance of car traffic, encourage public transport use, make better provision for cycling and walking, and/or develop non-motorised routes.

How can we balance the needs of all road users including pedestrians, cyclists, the elderly, children and those
with mobility difficulties?
Options could include:
• Imposing speed restrictions (20 mph?) in selected parts of the town
• Introducing traffic management around schools at key times of day
• Creating a one-way street system and a pedestrian area around the War Memorial in the High Street
• Restricting large vehicle access to the town centre

How can we promote access for all?
Some residents on low incomes or with mobility difficulties (including the elderly and very young), face real
difficulties and expense getting around. This limits access to employment, shops, health, education and social
services. To promote access for all should we:
• Improve access to the station, providing more space for cycles, buses, taxis, electric bike storage and charging?
• Subsidise transport schemes that assist young or unemployed people to lease/buy small cars, mopeds or bikes so they can travel to work?
• Subsidise improved public transport or other transport methods that reduce dependence on cars ?

What do you think? Let us know your views by taking part in the consultation process!

Meanwhile, look out for next week’s article in which we will discuss parking issues and options.

The Localism Act 2011 gives significant new rights and powers to local communities. These help ensure that local people and groups have a real opportunity to actively shape and influence the community facilities and services that underpin our everyday life:

The Community Right to Challenge enables the community to submit an ‘expression of interest’ in taking over a local authority service that we believe could be run more effectively by Haslemere Town Council or other community and voluntary groups. Examples could include parking within the town and youth services.

The Community Right to Bid can be used to protect buildings and amenities that play a vital role in local life by allowing the community to nominate them for registration as ‘assets of community value’. When registered assets come up for sale or change of ownership, the community is given time to develop a bid and raise the money to buy the asset when it comes on the open market. Assets that we could register include sports/recreational facilities (e.g. The Herons), cultural amenities (e.g. Haslemere Museum), youth centres (e.g. Wey Hill Youth Campus), health centres/hospitals (e.g. Beacon Hill surgery), open spaces (e.g. Wey Hill Fairground Car park, Lion Green), pubs and shops.

The Community Right to Build allows the community to propose small scale, site-specific, community-led developments. Examples could include a youth facility, an arts centre or a housing association development to provide affordable housing.

Such initiatives will of course only succeed in the long term if there is sufficient community support to fund the initiatives and to staff and sustain any new facilities or services. However, if we fail to take advantage of these new rights we will have less scope and opportunity to create or protect valued community assets or set up new community organisations to run local activities and services. This means that the future of our town will depend largely on the decisions of external authorities.

Do you favour using these new rights for the benefit of the community? Do you have ideas for specific projects that might benefit our local facilities and services? Let us know what you think and help determine the future of Haslemere – we look forward to your suggestions!

Look out for next week’s article in which we will discuss the future of our roads and streets. 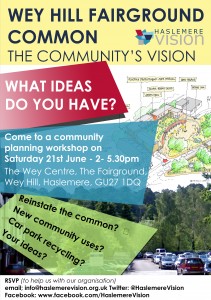 Come to a community planning workshop

What ideas do you have?
1. Revert back to recreational common land
2. Range of communities uses
3. A car park
4. Your ideas………………

RSVP (to help us with our organisation)

Map of The Wey Centre: 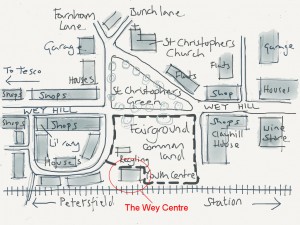 Haslemere Vision is delighted to announce the following three winners of the Prize Draw prizes, entered by them on it’s stand at the Charter Fair on 5 May.

Haslemere Vision would like to thank the three Haslemere businesses for their generous support, and also The Haslemere Sweet Shop on the High Street, for its donation of a jar of sweets.

In February 2014 Waverley Borough Council, having listened to representations from Haslemere Town Council, Haslemere Vision and others, withdrew its application to re-surface the Wey Hill Fairground and install the infrastructure for pay-and-display parking at a cost of £342,000. The community now has the chance to state its preference for the future of this important community space. Local residents and organisations are invited to weigh the merits of the alternatives at a public workshop, organised by Haslemere Vision, at the Wey Centre on Saturday June 21st 2014.

The Wey Hill Fairground is registered, under the Commons Registration Act of 1965, as one of only two tracts of common land in the town centre. From the early 20th century it was a green space used for informal recreation until the late 1950s. It was then paved with crushed stone and rough macadam, as it is today. From 1906 an annual fair was held there for over 100 years until the operators declared the site too expensive.

In 1968 ownership of the site transferred from Haslemere Urban District Council to Waverley Borough Council at no cost. Under WBC management, it has, for some years, been used as a free car park divided between commuter and local parking. On Saturdays WBC provides green and household waste collection on the site.

Some question the legality of the present use of the site and argue for it to be returned to its former use as a town green. Others argue that, as the town is so short of off-road parking, the site must continue to be used primarily as a car park, though other compatible uses of the space could be explored. Other proposals, including that recently proposed by the Haslemere Chamber of Trade, envisage creation of a public space or town square combined with a mix of commercial, residential and community premises, with or without the provision of underground parking.

None of these choices are simple. What do you think? If no alternative vision is realised for the space, or no value put on it as a community asset, then WBC will reapply for the designation of the site as a car park and deregister the Fairground from the Commons Register. Come to the Wey Centre from 2-5.30pm on June 21st and help to determine the future.

This is the second of six articles exploring some of the important issues and strategic choices facing our community over the next 15-20 years. Today’s article focuses on the local economy.

Historically, Haslemere had a dynamic local economy. Recently many businesses have been closed and the sites redeveloped for housing, reducing the number of local jobs. This affects the whole community but is particularly serious for younger people looking to work locally. Without a vibrant, sustainable economy, the town will become a dormitory satellite of Godalming, Farnham, Guildford, and London. Are we content to allow this trend to continue, to leave things to market forces, or should our Neighbourhood Plan include policies designed to attract new and diverse businesses to the town? Policies could:

• protect the current retail base by discouraging change of use
• promote development of modern office space to attract skilled/high tech employment
• foster development of small workshops for craft and manufacturing businesses
• encourage a wider range of shops and ‘high street’ businesses that better meet the needs of the local community and attract more visitors and non-residents.

Should we actively promote the development of local visitor and tourism orientated businesses, capitalising on assets like the Devil’s Punchbowl, Haslemere Museum, Swan Barn, Haslemere events and its status as a public transport Gateway to the South Downs National Park?

Haslemere currently has four separate commercial centres: Old Haslemere, Wey Hill, Hindhead (Crossroads), and Beacon Hill. In recent years, investment has tended to favour Old Haslemere, arguably at the expense of the development of other centres. As shops and other ‘bricks and mortar’ services like banks face growing competition from the internet, will all Haslemere’s centres remain viable? Should we concentrate on the development of one centre that could attract a greater and more diverse range of shops? Can we find a way to create closer integration between Old Haslemere and Wey Hill? What is the future for retail in Hindhead and Beacon Hill?

Tell us what you think about these issues and options by taking part in the community consultations planned for June and September 2014. Meanwhile, look out for our third article in next week’s Herald on here on our website!

Sign up for our newsletter, we'll send you update emails for the subscriptions selected below